Garbage disposal is used nearly 90 years. It has appeared thanks to John Hames. American greatly did not love the smells of rotting food in a garbage pail. Among other things, odor has attracted of mice, cockroaches and other insects. Hames solved this problem by very simple and effective way. He invented kitchen garbage disposal. This event took place in 1927. After 10 years, John founded In-Sink-Erator Company for production of these useful devices on an industrial scale. However US authorities initially have reacted very negatively on invention, fearing a clogging sewer. But John was insisted on technical expertise of his invention by the US Public Health Agency. The Agency conducted an appropriate inspection that demonstrated the positive impact of technology on the operation of the sewage system. As a result, she recommended widespread use of the device. At the beginning of 50s, John Hames has become one of the richest people. Today garbage disposal is installed on almost every kitchen in the American home, and InSinkErator Company is the largest manufacturer of these devices.

Today, the market offers a wide range of different models. The choice of the optimal device primarily depends on the price and features of garbage disposal.

Mechanical model uses the energy of flowing water. The stream of water is directed under pressure on the blades of knife, providing its rotation. Garbage is crushed by knife and is washed off in the form of very small pieces. 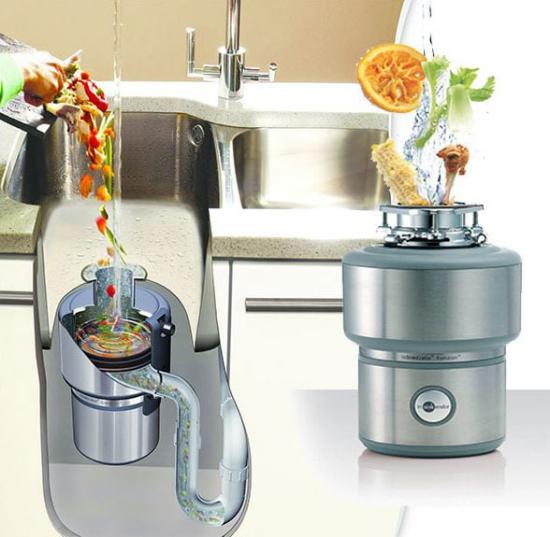 These devices are completely safe, because a knife is located far from a drain funnel in the sink.

Electric models are much more productive and operate from the mains. Grinding is carried out with the help of the special hammers. High noise level is the main drawback of these devices. Of course, safety requires careful connection to the mains due to high humidity and possible water leakage. 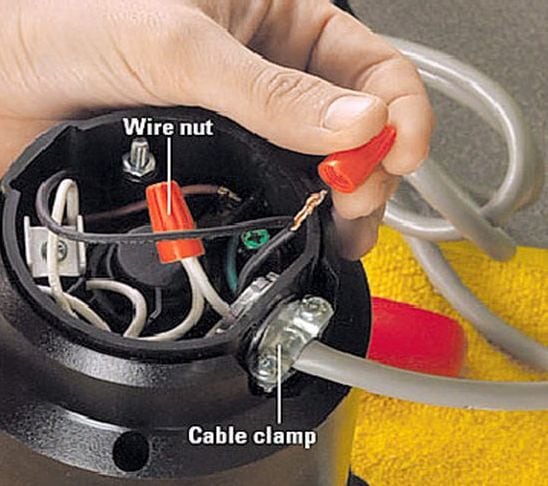 Mounting the garbage disposal under the sink also has its own features.

Electric models operate in the mode of single full load or by-step grinding. In the first case, the entire food waste is loaded and completely crushed after the device is turned on. In the second case, food waste is shredded in small portions for several cycles in the engine on / off mode.

The sequence of work in this mode is as follows:

– turning on device by pressing a button;

– placement of waste in the sink drain hole;

– turning off the device after shredding food wastes (the sound of the engine changes from the workload to idling mode);

– washing out the garbage powder for about 10 seconds by running water;

– activation of a new cycle (if necessary).

Household garbage disposal is a soundproofed camera with rotating wheels and cams. 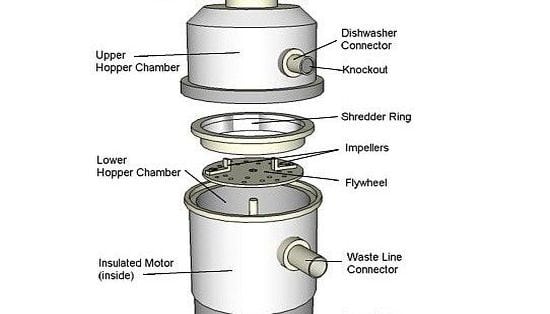 Food wastes enter the chamber, are crushed to powder and are washed off with the help of cold water into the sewer pipe. The chamber is separated from the sink with the help of the special rubber sleeve and liner. The device is connected to conventional mains. On / off button is usually placed on a countertop or on upper surface of sink. Draining is connected to the sewer drain. Experts argue that the shredded waste well remove grease on inner tube wall.

Operation is well illustrated by example of recycling, for instance, cherry pits. It’s as follows:

– cherrystone from drain hole of sink is directed into chamber with rotating disc (its rotation speed is 1450 rpm);

– centrifugal force directs remnants on the chamber wall in form of grater;

– grater turns these remnants to powder;

– the water flow from the tap washes away powder into sewage system.

The operation of this device is perfectly illustrated on the video.