In accordance with the requirements of the UHD Alliance, TVs with Ultra HD Premium certificate must provide a peak brightness of more than 1000 nits and a black level less than 0.05 nits, or more than 450 nits and less than 0.0005 nits, respectively.

Two standards took into account the key features of various technology. LED LCD displays provide a higher level of maximum brightness, but inferior in black depth. At the same time, OLED displays provide an incredibly deep black due to the lack of backlighting, but they are inferior in terms of maximum brightness. However, the contrast ratio is high in both cases (1000 / 0.05 = 20,000; 450 / 0.0005 = 90,000). However, in both cases, the contrast is high enough to provide image quality according to the Ultra HD Premium certificate.

The maximum brightness of the projector significantly affects viewing comfort. Models with low brightness require careful darkening the room. Powerful projectors with a brightness of several thousand ANSI lm provide high enough quality without additional dimming, even in diffused light. Unfortunately, even very powerful models do not provide high quality in the case of direct sunlight on the screen.

The contrast ratio of the projected image depends on several factors.

1. The ability of the projector to block the light source.

Of course, the projector does not project black on the screen. It blocks the luminous flux. The effectiveness of this task mainly depends on the technology used. But no projector can completely block the light. Therefore, any screen always stands out against a completely black background, for example, in a dark room. In a perfectly dark room, this factor determines the projector contrast and is synonymous with the depth of black. The image illustrates this fact. 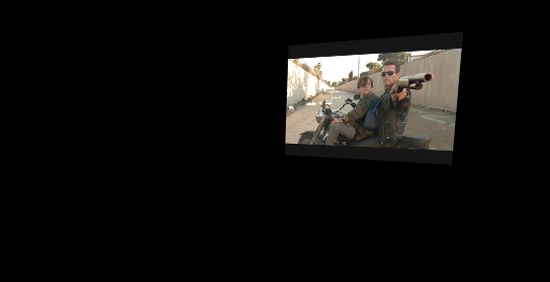 The transmitted light forms gray bars at the edges of the frame.

Brightness equally affects the level of white and black, because the matrix blocks a certain percentage of luminous flux. Therefore, its change does not affect the contrast ratio. Its increase ensures the growth of both values, without changing the overall image contrast ratio.

3. The brightness of the lighting in the room.

This factor is the basis for the projector. In a lighted room, black light corresponds to the brightness of the whiteboard in the background. Thus, black cannot be darker than a marker board.

But reducing the illumination level in the room increases the image contrast ratio.

First, we will do the calculation for an ideal projector with a brightness of 3000 ANSI lm, with an absolute black depth due to the complete blocking of the light flux in a completely dark room. In this case, its contrast will reach an infinite value (3000/0).

Now suppose that the lighting in the room slightly illuminates the image, for example, due to incomplete darkening. Even a very small illumination, equivalent to only 100 ANSI lm, will increase the levels of black and white by this value. In this case, the image contrast will be only 3100/100 = 31: 1.

But many people have a reasonable question about whether the real contrast is equal to this value in the technical specification.

With the lights turned off in a small room, BenQ showed a contrast ratio of 87: 1, and Epson – 56: 1, which is quite consistent with their stated characteristics.

But the color contrast with the black showed different results. BenQ has pretty faded colors. 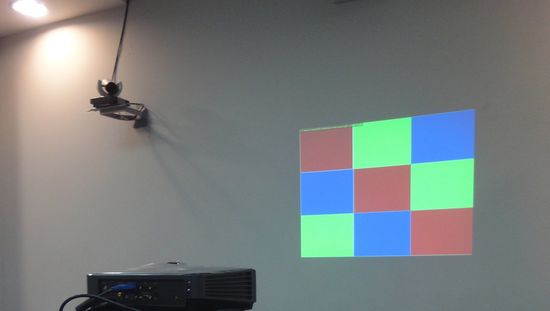 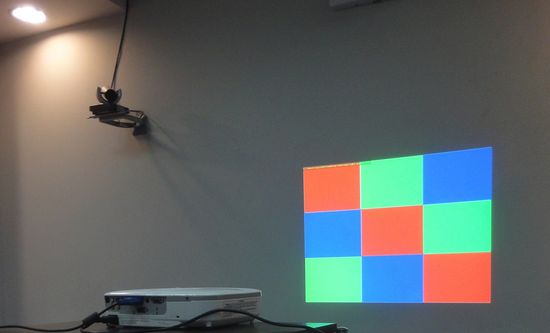 Measuring the contrast in white and black squares on one screen corresponds to the ANSI method and is called ANSI contrast. But almost all modern projectors use an automatic aperture that blocks the luminous flux in dark scenes. 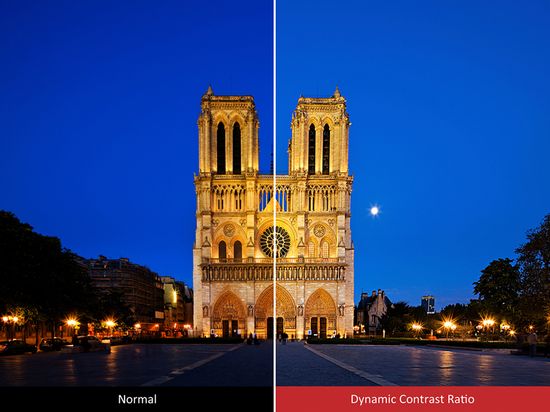 Today, measuring the projector contrast uses the “full off / full on” method. They are carried out for a white screen with an open aperture, and then for a black screen with a closed aperture. This value is called dynamic contrast and is radically different from traditional ANSI contrast. Almost all leading companies are developing their own technologies to increase dynamic contrast. For example, Epson developed and patented C2Fine technology, which increases this value to 600,000: 1.

The list of ways to improve image contrast includes:

– full blackout in the room;

– decrease in the level of reflected light from light walls;

– the use of a dynamic aperture;

– brightness increasing improves the contrast, but reduces the color accuracy.

– the light level significantly affects the contrast ratio of the projected image;

– the projector brightness increases the contrast of the projected image.