In fact, the radial fan is a wheel with blades in the volute casing that is often called the cochlea. As known, low-power models of this type are often used as a cooling fan in computers. 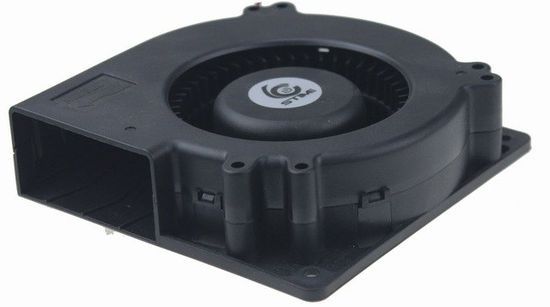 Powerful radial fans are often used on the industrial facilities.

Radial fan has a rotating rotor and blades of a spiral shape. The blades may be curved forward or backward. Impeller is connected to the engine via elastic coupling or through a gearbox.

This fan works as follows. Initially, the air is sucked inside through the rotor hole. Then, the centrifugal force of the rotating impeller moves the air flow towards the diffuser, increasing its pressure due to a decrease in speed. In fact, this device converts the kinetic energy of air flow into the potential energy.

These fans can be classified as follows:

– models with one-sided or double-sided suction – depending on the air intake;

– models with a right or left rotation;

– models of general or special purpose.

The general purpose fans are designed for non-corrosive gas mixtures with dust content is not more than 100 mg / cubic meter and with a temperature not more than 80 degrees. They are usually made of carbon steel.

The blades of radial fans differ in the shape.

Radial fans with forward-curved blades provide the high pressure of air flow. However, the engine in these models works with greater load. Therefore, the risk of the motor overheating is above. They also have a more low efficiency and high noise level.

Unlike them, fans with backward curved blades have a small noise, good efficiency and stable power.

Additionally, models with radial ends of the blades also have high efficiency and low noise. But the power consumption and noise increases with an increase of the air supply.

– performance, that is volume of air passing through the fan per unit time. Volume flow is usually measured in Cubic Feet per Minute (CFM);

– air pressure at the fan outlet;

– the difference between the pressure on inlet and outlet of the fan;

– pressure dependence on the fan performance.

These fans are also divided into models with high, average and low rotation speed. Fans with high speed usually have wide impellers and a small number of blades which are curved backward.

Fans with an average speed are divided into two types. They use an impeller of small width with backward curved blades or a wheel of drum type with forward curved blades. Additionally, such fans have a larger diameter inlet.

Usually, fans with low rotational speed have a relatively small diameter of inlet, a narrow impeller with curved forward or backward blades and spiral housing with a small width.

Of course, these factors influence the choice of the optimal fan.

In turn, high-speed radial fans are most popular in modern equipment with microchips, which requires efficient cooling. This video demonstrates the evolution of the popular AeroBlade Fan into the AeroBlade 3D Fan.