Screen consists of matrix for the image playback and LED backlight that is located behind of the matrix and provides the image lighting. Many users are faced with the pervasive problem of uneven LED backlight. The periodic arrangement of LEDs and other factors affect on the dispersion. The dispersion causes clouding that is present in virtually all TVs with LED backlit. This effect causes the gradation of gray. Today, companies solve this problem with the help of Local Dimming technology that is based on combining LEDs into blocks. They can be independently on / off in the required area of the scene, providing a deeper black. 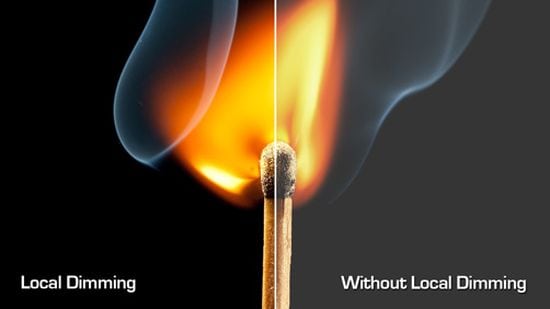 But the implementation and name of Local Dimming technology are different for companies. Today companies call this technology as follows:

The backlight creates a stream of light with adjustable brightness. Some TVs can automatically adjust the backlight brightness depending on the image. For example, the backlight level is reduced for a dark image and a frame on the screen darkens. A disadvantage of such adjustment is manifested in the fact that some zones start to transmit more light than others.

In fact, FALD is an improved Direct LED. LG has been using this abbreviation in its TVs since 2018. The technology is based on turning off the backlight in separate zones to provide deeper black. The screen can contain several dozen groups of LEDs.

Backlighting uses the fluorescent lamps. Today it’s practically not used because of the high price and inaccessibility of local dimming.

Backlight is based on the use of LEDs.

The LEDs are located on the sides of the screen. Full local dimming is not available, but this technology does not actually increase the screen thickness.

LED Plus is an improved EDGE LED with the ability of local dimming in large areas, for example, either the left or right area of the screen.

NANO Full LED is an improved Direct LED with the addition of microparticles to the diffusion layer for a softer backlight.

Subjective factors can also cause uneven backlight. This defect is sometimes manifested immediately. But more often the unevenness of backlight begins to emerge gradually with time.

Uneven LED backlight may be due to:

An error in assembly on the conveyor can be accompanied by skipping the installation of a certain number of LEDs or they are placed too close to each other.

For example, LEDs are accommodated too close to the walls. In this case, the reflected light is mixed with light from the other diodes and creates an excess of light in certain locations.

Uneven LED backlight can also to occur during exploitation. The list of reasons includes:

– failure of one or more LEDs.

This defect forms a dark spot on the screen.

– LEDs begin to give the less light as a result of exploitation.

In this case screen darkens or begins to show the stains.

All these problems are eliminated by replacing all or some of the LEDs. Repair such defects is carried out by specialists of service centers.