As known, DLP (Digital Light Processing) technology was developed in 1987 by a Texas Instruments Larry Hornbeck engineer based on a DMD chip. After 10 years, Digital Projection Ltd introduced the first active DLP projector. In 1998, Texas Instruments and Digital Projection Ltd received an Emmy Award for technical achievement. Today, DLP projectors successfully compete with 3LCD and LCoS models. Of course, the type of projector affects its spec and, accordingly, its choice.

As a rule, most modern DLP projectors use only one semiconductor DMD (Digital Micromirror Device) chip, which forms an image using a huge number of micromirrors.

Electric signal practically instantly turns each mirror to one of two fixed positions, providing reflection of light either through the lens or onto a heat sink.

Thus, each mirror reflects the light of the lamp either onto the screen or onto a heat sink of the projector, forming, respectively, a white or black dot on the screen. Multiple switching from black to white provides shades of gray on the screen.

Unfortunately, a 1-chip projector at a time passes only one component of a color image to the screen. A rotating wheel with color filters (color wheel) divides white light into individual colors. 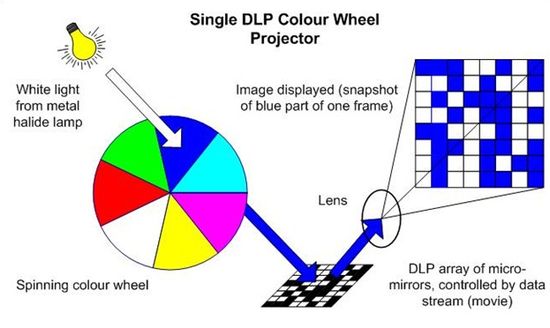 The color wheel is always located next to the light source. 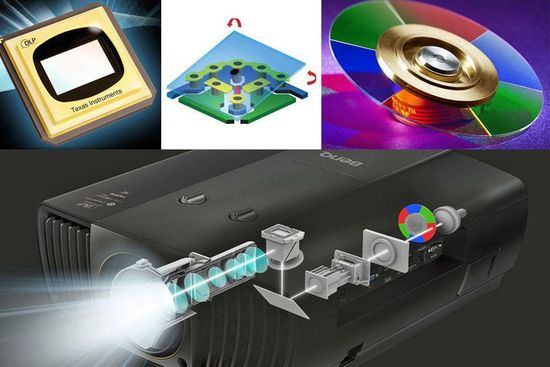 The first models rotated the color wheel at up to 3,600 rpm. But it was not enough to eliminate the rainbow effect, when the object contour acquires multicolored artifacts. 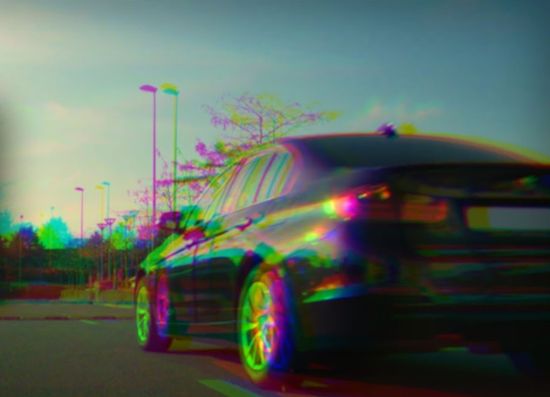 Texas Instruments has created Brilliant Color technology with a six-segment RGBRGB disk and an additional. Six-segment disk reduces the time for changing colors by half. A transparent segment increases the luminous flux, but reduces the number of gradations due to the imbalance between the brightness of black and white and color images. Too high brightness of the black and white component worsens other colors, making them darker and faded.

In the future, companies experimented with the addition of intermediate colors and the area of the transparent segment. Today, manufacturers use different color configurations. Modern 1-chip DLP projectors use mainly the 6-primary colors, including Red, Blue, Green, Cyan, Magenta and Yellow. 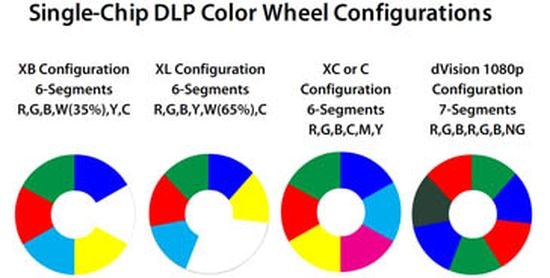 The operation principle with mirrors provides deep black and, accordingly, high contrast. But switching the mirrors is sometimes accompanied by a decrease in the number of colors gradations, reducing the smoothness of color transitions.

Companies also tried to develop a 2-chip DLP projector. Their color wheel divides light into red-green and red-blue colors. The prism system extracts the red component and sends it to one of the micro-mirror arrays. The green and blue components are alternately projected onto another chip.

Further, two DMD-matrices modulate the corresponding rays, constantly projecting a red component on the screen. This circuit compensates for the insufficient intensity of the corresponding part of the lamp’s emission spectrum. But it did not solve the problem of the rainbow effect and did not receive wide distribution. As a result, companies have developed a 3-chip design. 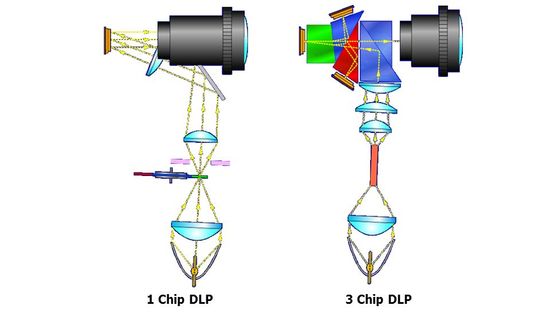 This projector divides the luminous flux of the lamp into three components using special prisms. Then, each beam is directed to the corresponding DMD-chip, modulated and returned to the prism, which combines it with other color components. Finally, a prism sends a full-color image to the screen through the lens.

The design of the 3-chip DLP projector provides very low response time, excellent contrast and high brightness. Using the reflection of the light flux virtually eliminates the loss of brightness, in contrast to the 3LCD projectors that work on light pass. Accordingly, less powerful lamps require a less powerful cooling system with less noise. But most modern DLP models use semiconductor light sources (LEDs or LED lasers), which do not require cooling at all. Moreover, the characteristics of the DMD-chip practically do not degrade over time.

This video demonstrates the operation principle of TI DLP technology.