The rapid development of innovations based on digital technology is the main trend for all segments of consumer electronics. Of course, high-tech projectors are no exception. For several decades, the projector has become a complex digital device with huge media capabilities. The projector in the smartphone, miniature Pico and Cube projectors with semiconductor light sources (LEDs or laser LEDs) perfectly illustrate this trend.

As known, modern models form a projection image using DLP, 3LCD or LCoS technology. DLP and LCoS technologies use reflected light, while LCD works on the light pass. Of course, each of them has its pros and cons, but they all have been successfully competing in the market for many years.

LCoS can be positioned as a hybrid of 3LCD and DLP technologies. In fact, the LCoS matrix is an LCD matrix that is glued to the mirror. The control semiconductor layer on the substrate with a reflective surface is under the matrix with an array of liquid crystals, protective glass and a polarizer. The spatial orientation of the liquid crystal in the semiconductor layer depends on the control signal. 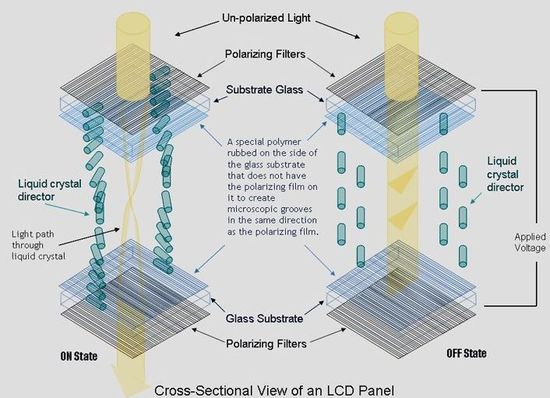 In fact, it adjusts the transparency of the cell, ensuring control of the light flux passing to the reflective layer and back. 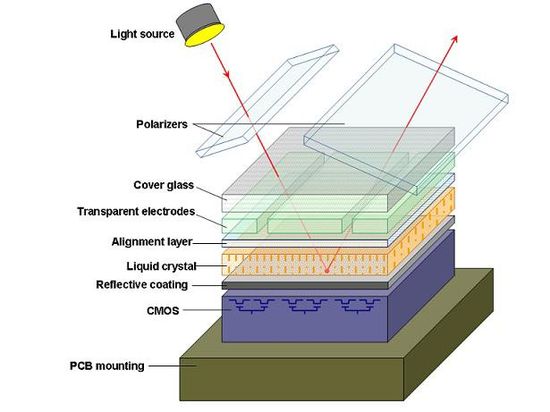 Thus, the liquid crystal matrix modulates the luminous flux, using not the light pass, but its reflection. The light from the source is divided by a system of dichroic and simple mirrors into three light streams corresponding to red, green and blue. Further, each of them falls on its own Polarizing Beam Splitter (PBS) and on the reflecting matrix. The matrix modulates the light, forming the color components for each color channel. They pass back through the PBS and come together in a dichroic prism, forming a color image. The resulting picture is projected through the lens on the screen. 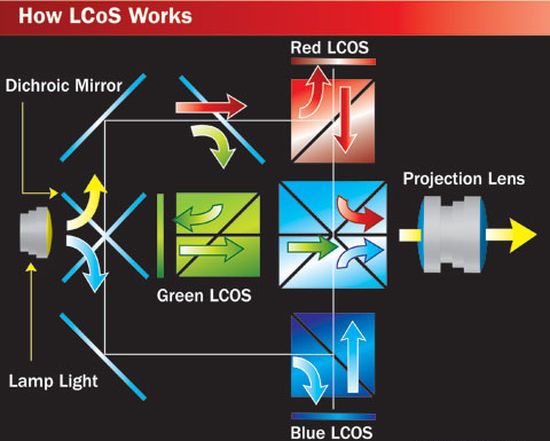 Today several companies use this principle of image formation, having patented their own developments. The list of the most popular includes SXRD (Silicon X-tal Reflective Display) from Sony, D-ILA (Direct Drive Image Light Amplifier) from JVC.

The developers of LCoS technology initially set themselves the task of combining the advantages of 3LCD and DLP technologies, of course, without their cons.

LCoS projectors provide very high image quality, high brightness and contrast. Moreover, they support the projection with very large image format. In addition, the production technology of reflective matrices allows companies to place the control conductors and electronics behind the reflective layer, increasing the coverage area of the pixels. As a result, these models do not have a screen-door effect. 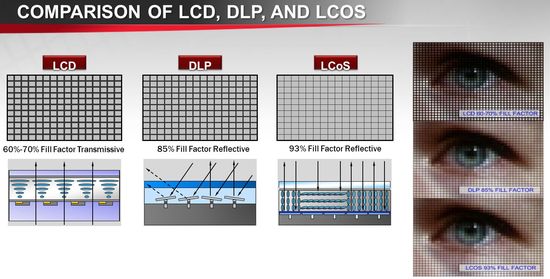 In addition, LCoS technology allows companies to create matrices with a very high resolution, which certainly corresponds to the modern trend.

Of course, these projectors use many other innovative solutions. For example, JVC projectors control an array of points with analog signals, providing smoother color gradients.

– a high coefficient of useful filling the matrix surface (the distance between adjacent elements is only a few tens of micrometers) reduces the Screen-door effect and increases the resolution;

– LCoS chip is more resistant to high temperature due to placement on the cooling substrate. As a result, powerful installation projectors use mainly LcoS technology;

– lack of flicker and rainbow effect.

Of course, these features significantly influence the choice of the optimal projector.