As known, the inner surface of the refrigerator during work is covered with a frost layer. Therefore, refrigerators require of the regular defrosting. Modern models use drip and air defrost. 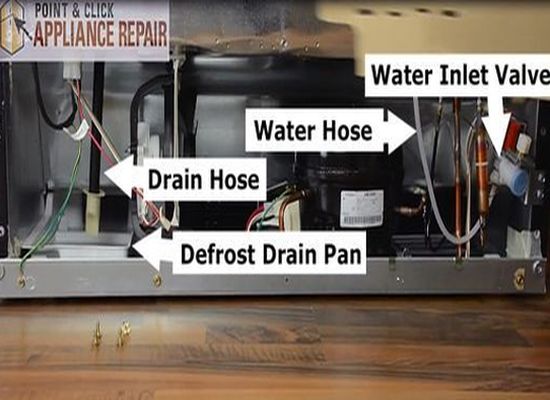 This system works as follows. Usually, the evaporator is hidden inside back wall on the rear panel of the refrigerating chamber in order to avoid contact with foods. In addition, the open evaporator can be accidentally damaged. Respectively, it provides a low temperature of the rear wall. Therefore, water vapor condenses on the wall with the ice formation. But other chamber walls are not covered with ice. At the end of each cooling cycle, the electric heater heats evaporator after the compressor stopping. As a result, the ice melts and the water flows into special container by special chute. After compressor activation, the water in the container is heated and vaporized. Then the next cycle begins.

– need to clean the ice manually;

– this technology is available only in single door refrigerators;

– automatic drip defrosting is not possible in freezers;

– the rear panel is constantly covered with ice;

– the temperature in the lower and upper parts of the refrigerating is different by several degrees.

No Frost or air defrost

This system is based on forced ventilation through the evaporator, which is located outside the freezer. 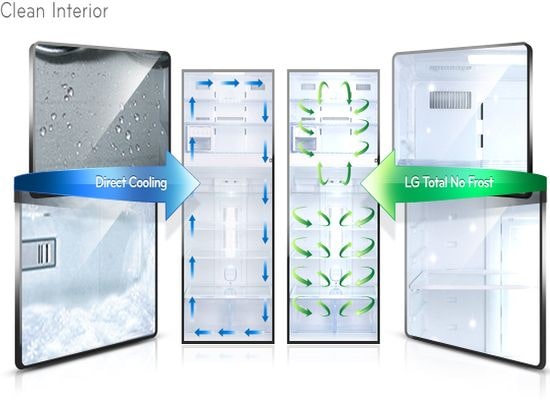 It was developed and patented by specialists from Zerowatt factories from the Candy Industrial Group. The system appeared under the Frost Free name in refrigerators of the Candy, Hoover and Iberna brands. Today, a similar technology is widely used by various companies under the name No Frost.

This technology continues to improve. For example, Whirlpool developed Supreme Total No Frost technology, which uses two separate No Frost subsystems with two fans for the freezer and refrigerator compartment. 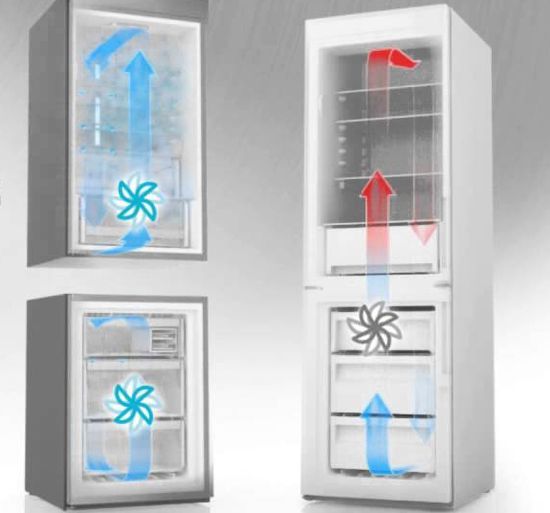 The video at the end shows the benefits of improved Hisense Total No Frost compared to conventional Frost Free.

Refrigerators with No Frost system are equipped with fan that is located next to the evaporator and provides intensive air circulation inside the refrigerator. The fan sucks air from the chamber and blows it through the evaporator. The air is cooled and returns to the chamber through special holes.

No Frost technology prevents frost build-up on the inner walls, eliminating the need for periodic manually defrosting. Technology operates in fully automatic mode. However, some manufacturers recommend defrosting of refrigerator several times a year in manual mode for prophylaxis.

– No Frost system works in the freezers;

– uniform temperature inside the refrigerator;

– the initial temperature inside the refrigerator is set almost instantaneously regardless of the chamber filling degree. This reduces power consumption;

– this technology is available in double door, triple door, side by side door refrigerators;

– absence of condensation on the back wall.

– decrease in capacity due to the evaporator and fan;

– more electricity consumption due to use of fan and heating elements;

– additional noise due to the fan operation;

Foods are constantly blown by the flow of cold air and, accordingly, dehydrated. But, the foods storage in the packages solves this problem.

Of course, these factors affect the model functionality and should be taken into account when choosing a refrigerator.

1 thought on “No Frost technology”