10 years ago, the first smartphones used batteries with a capacity of 1200-1500 mAh and chargers of 1 A / 5 V. One charge usually provided work for 1-2 days. New features and large screens have required an increase in battery capacity due to increased energy consumption. Accordingly, the recharge time has increased significantly. As a result, the user was forced to recharge the battery for several hours, and the battery was discharged during the day. But manufacturers solved this problem by developing fast charging technology. In fact, in full accordance with the laws of physics, all these technologies simply use higher power by increasing voltage and current.

Unfortunately, they have an obvious problem. An increase in voltage and current raises the temperature during charging, accelerating battery degradation. As known, the optimum temperature of the lithium-ion battery varies between 15-35 ° C.

This problem is weakly manifested in the segment of budget models due to the relatively short period of their operation. Most often, owners change them to newer phones in a few years. Typically, battery degradation during this time does not exceed 20-30%, reducing its capacity to 70-80% of the original. But expensive models worth about $ 1,000 change much less frequently.

In 2011, the USB consortium adopted a new standard with an expanded range of value used to charge voltage and current. Earlier, standard USB 3.0 used a current of up to 900 mA and a voltage of up to 5 V. USB Battery Charging Revision 1.2 increased the current to 1.5 A, reducing the charging time. But in practice, only expensive motherboards and laptops had such a powerful USB port. Usually, it had a designation in the form of lightning.

Unfortunately, smartphone makers continued to complete their models with standard 1 A / 5 V chargers. As a result, the user was forced to additionally buy a Battery Charging 1.2 charger. 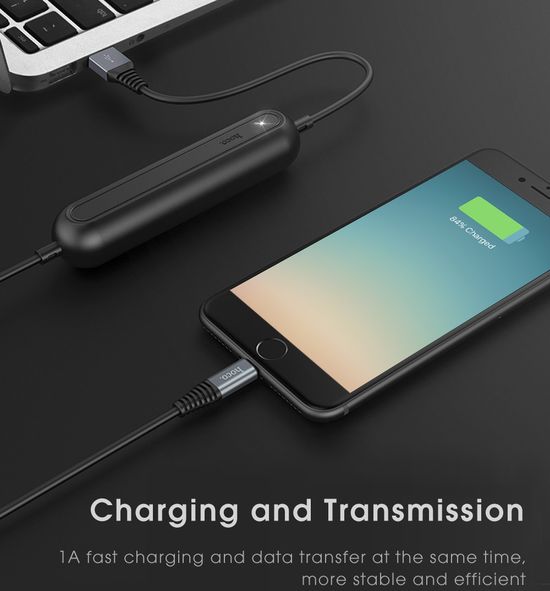 In 2013, Qualcomm introduced Quick Charge1.0 with support for the Snapdragon 600 chipset. It used the traditional 5 V, but increased to 2 A current. Next QC 2.0 was the first popular standard fast charging. 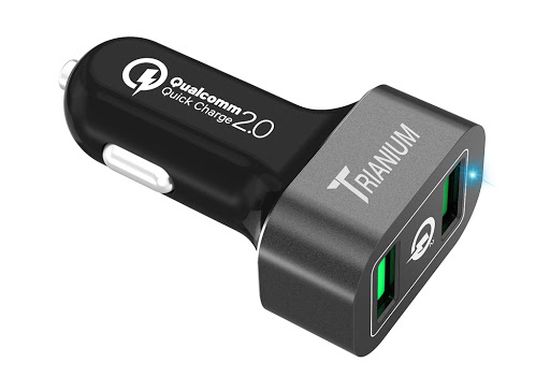 It already supported phones with 17 different Snapdragon chipsets, including Snapdragon 200, … 810. This version also used currents up to 2 A, but at voltages up to 12 V. These restrictions were due to USB-microUSB cables that withstood up to 2.4 A without overheating. As known, heat loss is proportional to the current and the square of the resistance. As a result, the maximum power of QC 2.0 increased to 18 W (12 V x 1.67 A) vs 10 W (5 V x 2 A) of the first version.

Moreover, QC 2.0 already used special controllers in the charger and in the smartphone to regulate the voltage. In particular, the smartphone selected the required voltage and current using D+ / D- contacts in the USB port. Charger without QC support by default to use a conventional 1 A / 5 V.

Unfortunately, a high power of up to 18 W significantly increased battery heating. Of course, the standard contains a safe temperature range with the fast charge mode turned off, but not all companies have used it because of marketing reasons.

The advent of the more powerful Snapdragon 810 additionally exacerbated the problem. For example, background activity during charging (software updates, etc) increased the CPU temperature. As a result, general overheating led to rapid battery degradation and even a failure of the smartphone motherboard. Owners of the LG G4, Nexus 5x and Flex most often complained about this problem and even filed a class action lawsuit against LG.

Of course, Qualcomm did not ignore the problems with overheating. In 2016, the company introduced more powerful Snapdragon 820/821 and new QC 3.0. Its power remained within 18 W, but the voltage regulation changed from fixed (5, 9 or 12 V) to more smooth in the range of 3.6-20 V with a step of 0.2 V. Moreover, the standard allowed manufacturers to limit the maximum voltage, for example, no more 12 V. Given the lower temperature of the new Snapdragon (821, 820, 620, 618, 617 and 430), the problem of overheating was temporarily resolved. According to the company, charging up to 70% does not exceed 30 minutes for most smartphones with QC 3.0. 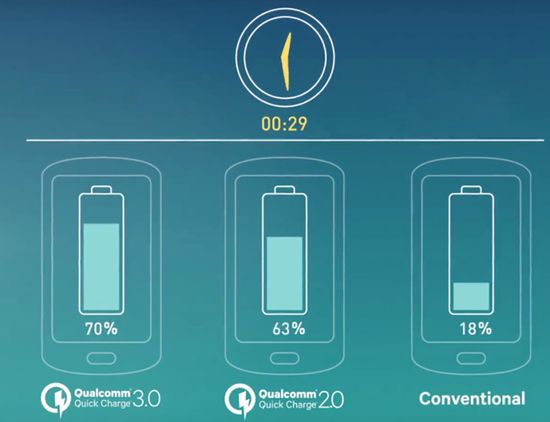 Unfortunately, the problem of using third-party cables for fast charging has not disappeared.

Finally, at the end of 2016, the company introduced QC 4.0, which solved almost all the problems. Firstly, it supports almost any USB-C cable. Of course, a cheap cable from a third-party manufacturer will reduce the fast charging efficiency, but it’s safe for the device. Secondly, QC 4.0 is compatible with Power Delivery. Specs QC 4.0 are no different from QC 3.0. In addition, it supports Snapdragon 630, 636, 835. According to Qualcomm, within 5 minutes, QC 4.0 recharges the 2750 mAh battery to 5 hours of use, and during 15 minutes – from zero to 50%.

In 2017, the company introduced QC 4+. The advanced version uses Dual Charge technology, dividing the current into two streams to reduce the temperature by about 3 degrees and increase the charging speed by 15%. It supports Snapdragon 660, 670, 710, and 845 chipsets.

At Qualcomm 4G / 5G Summit in Hong Kong, the company announced a Quick Charge 5.0 version with a twofold reduction in charging duration. In particular, the transmitted power over a wired connection will reach 32 W, and up to 15 W via a wireless charger. In the first case, Quick Charge 5.0 will use Triple Charge technology, dividing the input current into three different streams. Many experts expected QC 5.0 debut in the flagship Snapdragon 855 platform, but it still uses Quick Charge 4+.

Thus, Qualcomm has already introduced 5 versions and announced the 6th version of its technology. As a result, today Quick Charge is considered to be one of the most reliable among dozens of similar technologies.

In 2015, the market offered a wide range of devices with USB-C. This standard may contain many different protocols. But companies mostly chose USB 2.0 or 3.0 without creating problems with QC 2.0 support. 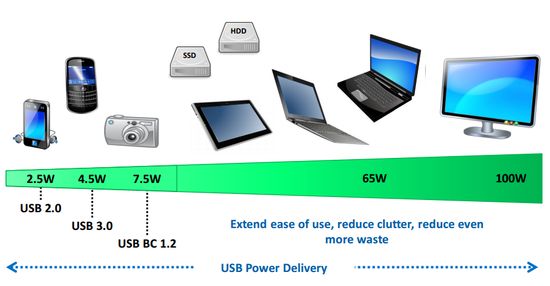 Then, the USB consortium developed the Type-C 1.2 standard with currents up to 3 A at 5 V. For example, Lumia 950 phones used such fast charging. Unfortunately, it created an additional problem with the cables. They use a special control chip to limit the voltage to no more than 5 V. But QC 2.0 uses voltages up to 12 V. Of course, using a QC cable without voltage limitation can damage the smartphone.

But Google intervened in the situation and officially recommended smartphone manufacturers to use USB-C in conjunction with QC 2.0. Unfortunately, many companies ignored the recommendation, insisting on the safety of their cables.

As a result, the USB consortium decided to use 3 A, 1.5 A, and 1 A cables with 10, 22, and 56 kΩ resistors. Unfortunately, some Chinese companies started using cables with only a 10kΩ resistors. Accordingly, USB-C 1.2 devices request up to 3A of current from the charger. In this case, the result is unpredictable, including burnout of the cable or connected smartphone.

Finally, at the end of 2015, the USB consortium published specs Power Delivery 3.0 standards, which range between 5 – 20 V and 1.8 – 5 A, providing maximum power up to 100 watts. Wherein, the type of connector can be USB-C, microUSB, or USB-A, with transfer in both directions. In fact, it even supports charging a smartphone from another smartphone. In addition, Power Delivery 3.0 is backward compatible with USB-C 1.2, providing charging, for example, the Lumia 950 from a PD charger.

All QC versions are backward compatible. Accordingly, a phone with a newer QC version will use the protocol with increased efficiency of the phone version, regardless of the version of the charger.

Unfortunately, Power Delivery compatibility issues with Quick Charge 2.0 and 3.0 are not resolved today. Some smartphones that simultaneously support PD and QC, including the Nexus 5x or Nexus 6P, will charge quickly. In other cases, the charger and smartphone will not be able to provide joint support for fast charging and will use standard slow charging of 1 A / 5 V. The worst case scenario is possible when using a cable with a 10 kΩ resistor for a model without PD support (USB-C 1.2 standard). In some cases, the smartphone’s motherboard may overheat and fail. Therefore, owners of models with QC 2.0 or 3.0 support need to carefully choose a cable and charger.

A huge number of different fast charging technologies and corresponding chargers from different manufacturers require unification. Today, the user is forced to spend efforts on collecting additional information for each model to determine their compatibility. The prospect of using a single charger for any Android device is too attractive for consumers, and companies are unlikely to ignore it.

In addition, Google is very effectively promoting this idea. In particular, the following document is available on the Internet:

“Type-C devices are STRONGLY RECOMMENDED to not support proprietary charging methods that modify Vbus voltage beyond default levels, or alter sink/source roles as such may result in interoperability issues with the chargers or devices that support the standard USB Power Delivery methods. While this is called out as “STRONGLY RECOMMENDED”, in future Android versions we might REQUIRE all type-C devices to support full interoperability with standard type-C chargers.”

Ultimately, a single USB Power Delivery standard will greatly simplify fast charging, saving consumers time and money. But, of course, this positive trend should not harm competition in terms of further improving the effectiveness of various technologies.

This video demonstrates some of the features of USB-Power Delivery.