Skip to content
Home » Projectors » Most popular mini projectors in 2019

As known, traditional projectors use powerful lamps as a light source. Unfortunately, they have a limited resource and high cost. In addition, their high heat dissipation requires a large internal volume and a powerful cooling system with a high noise level. But the rapid development of semiconductors has greatly expanded the capabilities of companies, allowing them to develop LED projectors using LEDs as light sources.

Today, companies usually produce modern LED projectors in the form of a compact thin parallelepiped, which easily fits even in your pocket. Moreover, the modern market also offers smartphones with the function of an integrated projector.

The modern market offers a huge number of different LED mini projectors. Of course, this factor is positive for the market, but it sometimes complicates the choice of the optimal model.

Of course, various TOPs simplify this task. As a rule, today consumers mainly focus on the latest innovative models, TOPs from experts and reviews of other consumers. This review offers models of the latter group.

Unfortunately, sellers rarely provide objective data about image quality at max projection size. As known, color saturation and image contrast directly depends on the brightness of the projector and the lighting in the room. But many companies often incorrectly indicate its value, for example, in Lux (in fact, this is illumination, but not the traditional Lumen Output) or peak brightness, which significantly exceeds Lumen Output. Nevertheless, a huge number of positive reviews indicates that most users are satisfied with the image quality and size.

Today, this model is the undisputed Best Seller. 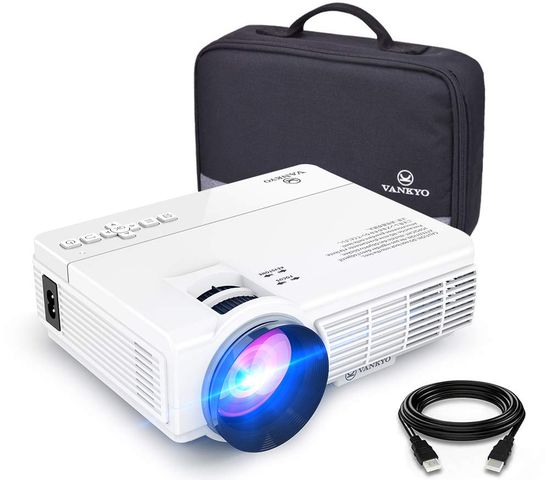 Of course, these specs may seem exaggerated given the very low price. But, given the huge number of positive reviews, this model really provides a fairly high quality. In this case, unprecedented dumping will please many potential buyers.

Its projection distance varies between 4.9 ft to 16.4 ft. 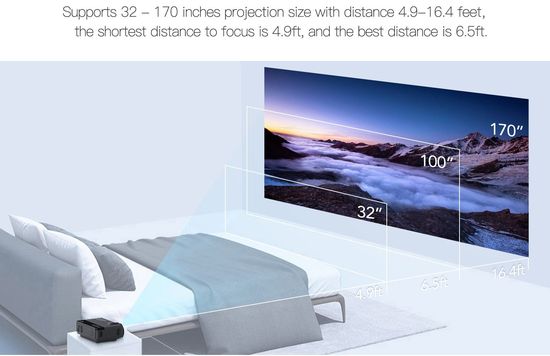 But a company recommends 6.5 ft for maximum image quality.

The model provides 2400 Lux, which corresponds to approximately 75 Lm (LED Beam Angle: 120 °). This model uses the efficient MStar Advanced Color Engine. According to the company, it increases brightness by 60%.

Unfortunately, the model does not have a built-in battery and runs on an AC power cord. Of course, this greatly limits its use, for example, in the yard.

This model also first appeared on the market in 2017. 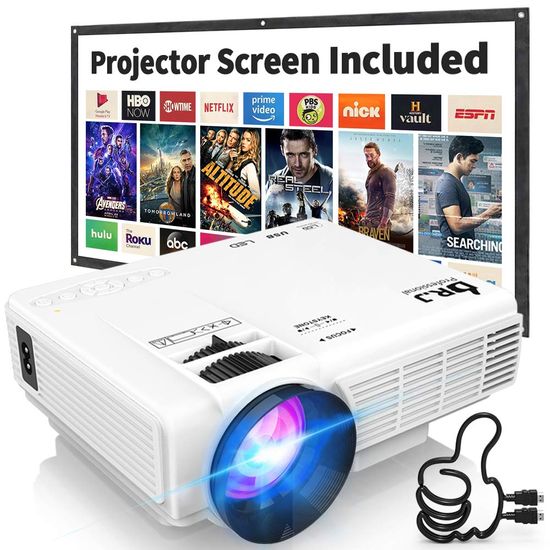 Unfortunately, the company does not indicate brightness. According to the company, Watching Size ranges from 32” to 176” (up to 100” diagonally) with projector distance 5 -16 ft. But image quality, including its sharpness and colors saturation, depends on the projector brightness.

Surprisingly, the model comes with a 100 Inch Projector Screen. Today this extra option is unique.

This projector from a Chinese company first appeared on the market in 2018. 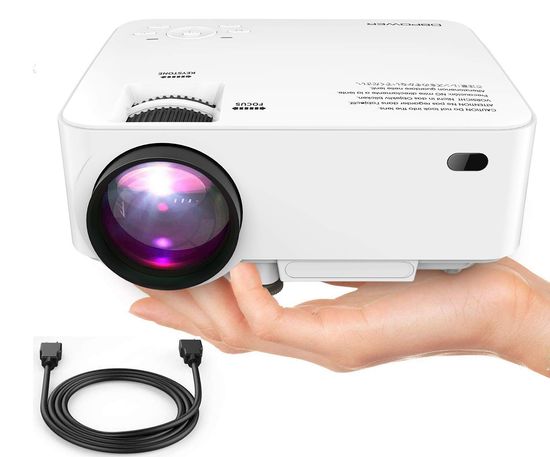 This model first appeared in 2017. Today the company offers its improved version. 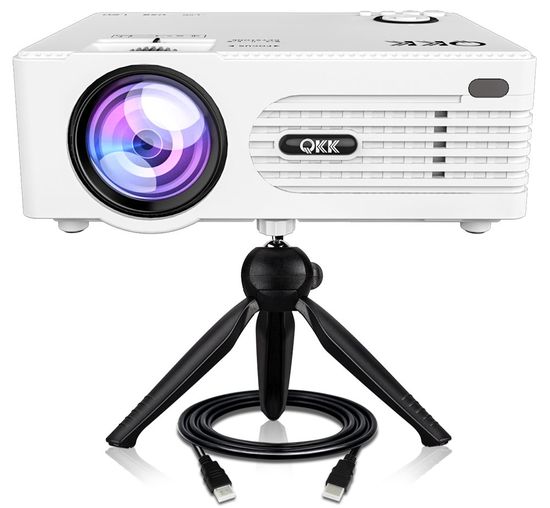 Projection distance varies from 5 to 17 ft, providing a screen width of up to 176” (up to 100” diagonally.) Company recommends an optimal distance of 6-10 ft.

Thus, the modern market offers a wide selection of budget mini LED projectors at prices ranging from $ 60 to $ 100, with brightness up to 100 lm and 800 x 480 native resolution (1080p supported), and contrast ratio of 2,000: 1. Usually, their optics provide a projection of up to 100” diagonally, but without specifying image quality. As known, clarity, contrast and color saturation are inversely proportional to the screen size. Thus, the user can adjust these values based on individual preferences.

Almost all modern models support a fairly wide range of connections. Some models, for example, Vankyo Leisure 3 have quite powerful dual speakers and provide Keystone Correction, which simplifies setup. DR. J Professional HI-04 projector comes even with a 100 Inch Projector Screen, which is unprecedented in this segment.