Of course, the chipset is one of the main components of a modern smartphone, affecting its performance. Therefore, many choose a smartphone taking into account the capabilities of chipset. Accordingly, all smartphone manufacturers pay great attention to this aspect.

As known, in 1991, Huawei formed the HiSilicon Technologies division. In 2004, it became an independent company and began to create its own RISC processor based on a license from the British ARM. Today, HiSilicon Technologies Co Ltd is developing high-performance mobile processors, successfully competing even with Qualcomm Snapdragon. The list of their latest chipsets of 2018 and 2019 includes the Kirin 970, 980, 990, 990 5G and Kirin 810.

According to the company, Kirin 970 is the first Neural Processing Unit (NPU) or AI accelerator. As known, NPUs use the cluster asynchronous architecture developed at Cornell University. Unlike traditional computing architectures, this highly specialized logic is designed to create different types of artificial neural networks. Usually, each core contains a task scheduler, its own memory such as SRAM and a router for communication with other kernels. One chip can contain several thousand cores.

The manufacture of a single-chip Kirin 970 system uses 10nm technology with the placement of 5.5 billion transistors in an area of about a square centimeter. The configuration of this SoC includes four ARM Cortex-A73 cores (2.4 GHz) and four ARM Cortex-A53 cores (1.8 GHz), combined according to the standard big.LITTLE scheme. Additionally, the Kirin 970 for the first time contains the 12-core Mali G72MP12 GPU (ARM GPU). 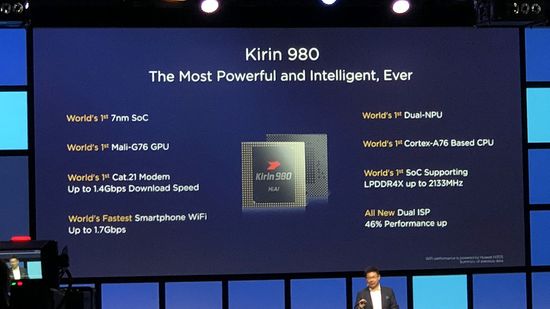 Kirin 980 became the first Huawei 7nm chipset. As known, it directly affects the energy consumption and, accordingly, the heating the processor during operation.

In addition, the company doubled the number of NPU units to accelerate AI apps. In fact, the neuromorphic Huawei processor has become dual-core, capable of recognizing up to 4,500 images per minute. Additionally, the Kirin 980 uses the fourth generation ISP (image signal processor). 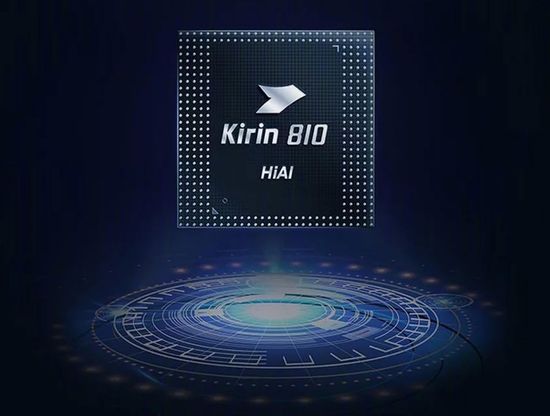 It also has an ARM Mali-G52 MP6 GPU and an AI task processing unit based on the new Huawei DaVinci architecture, which reduces energy consumption.

– the high quality of the built-in modems provides a very stable connection;

– the neural processor module on the Huawei DaVinci architecture in combination with the Huawei HiAi 2.0 platform surpasses even the Snapdragon 855 and Kirin 980 in the performance test for AI tasks. 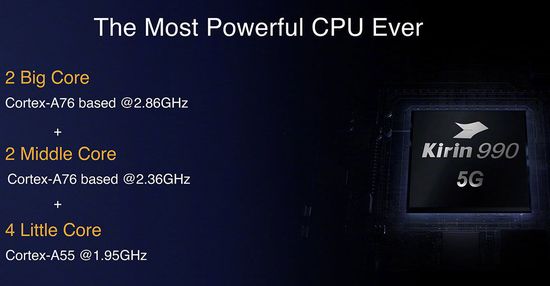 This new 7nm SoC for the first time includes a 5G modem with support for NSA and SA networks. In addition, engineers were able to place 10.3 billion transistors on it due to the use of innovative EUV lithography, which forms the elements of electronic microcircuits smaller than 45 nm. Additionally, the new chipset contains a neuromorphic coprocessor with Da Vinchi architecture and a 16-core graphics core.

Advanced adaptive receiver can work on any 5G NR (New Radio) networks, including Non-Standalone (NSA) and Standalone (SA). Today, companies are building 5G mainly to improve mobile broadband (eMBB) by increasing the speed of data transmission in the network. Today, it uses the 4G LTE infrastructure, operating in the millimeter range. Such networks are called non-autonomous. But this is only the first stage of 5G implementation. The next stage involves the creation of a new infrastructure with its own network core, which will additionally use low and medium frequencies. Of course, this will increase the coverage of 5G networks and the stability of high-speed data transmission. Such 5G networks will be called Standalone. Thus, Huawei phones already Standalone support.

Kirin 990 is manufactured without the use of EUV lithography. It does not have a 5G modem, operates at lower frequencies, and its neuromorphic processor uses only one high-performance core.

Today we can note the rapid improvement of HiSilicon Kirin chipsets. In just 3 years, the company introduced 5 new chipsets, each of which justifiably claims the highest level. As a result, today HiSilicon Kirin successfully competes even with Qualcomm Snapdragon. For example, Kirin 990 5G shows the same performance as Qualcomm Snapdragon 855, but has fewer memory channels, which affects the speed of data exchange, does not have NX-bit (No-eXecute) and does not use HMP (heterogeneous multiprocessor). But the price / quality ratio compensates for these differences.

Of course, Kirin chipsets to a large extent ensure the success of Huawei and Honor smartphones, complementing its new Harmony OS and excellent cameras manufactured in collaboration with the famous German Leica Camera AG.

In addition, Harris Interactive conducted a study of the reliability of smartphones by analyzing 130,050 cases of after-sales appeals from customers of a large European Darty retail network. According to its results, Huawei and Apple have the lowest percentage of failures and breakdowns. Thus, Huawei, Honor and iPhone smartphones today can be considered the most reliable.

Of course, all these factors retain excellent prospects for the smartphones of the Chinese giant.

This video offers Speed, Gaming & Screen Test comparison of Huawei Mate 30 with Kirin 990 5G vs iPhone 11 with A13 Bionic.