Skip to content
Home » TVs » What is Micro LED

The fierce competition and the rapid development of digital technologies triggered an innovative breakthrough in the consumer electronics segment. As a result, high-tech TVs have become one of the leaders in this trend. Only in the last 10 years, companies have developed and implemented HDR technology, including HDR10+ and Dolby Vision standards with support for 10-bit and 12-bit color grading, respectively, OLED and QLED technology, 4K and even 8K screen resolution, HDMI standard, including HDMI 2.1 (48 Gbps) with support for the transmission of dynamic metadata, HFR (high frame rate) format, etc.

Of course, the matrix directly affects the image quality. As known, modern TVs use OLED, QLED and LED LCD technology. Strictly speaking, QLED technology uses an additional quantum dot-based nanofilter between the LCD display and the LED panel and can be positioned as an improved LED LCD version. But huge popularity and aggressive marketing actually formed a separate segment of QLED TVs.

Micro LED technology has become the next step in the matrix development. As known, its wide distribution began after Apple and Oculus (Facebook) bought the mLED company. In fact, Micro LED is a new technology of self-emitting display, and can be positioned as an analogue of OLED technology.

In 2000, a research team of professors Hongxing Jiang and Jingyu Lin from Texas Tech University announced the creation of a prototype Micro LED. Today, companies are often used for displays with this technology abbreviations mLED, μLED or ILED. According to many experts, these matrices will compete with OLED technology.

This diagram illustrates the difference between this technology from TFT LCD and OLED. 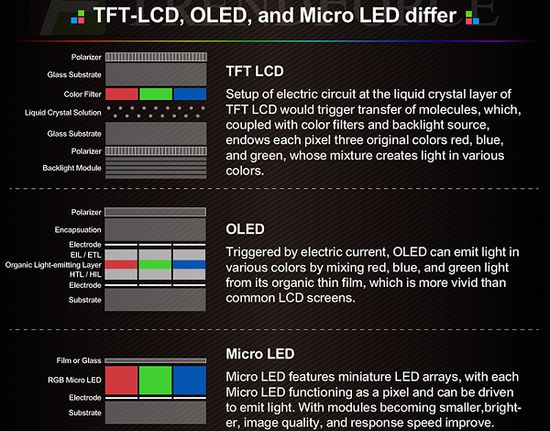 Similar to OLED or plasma screens, the Micro LED display does not require backlighting because it uses self-emitting diodes. Its every single pixel generates a light signal of a given color. Of course, the lack of diodes for backlight reduces the matrix thickness. But, unlike organic LEDs in the OLED matrix, Micro LED uses an inorganic material, including GaN (gallium nitride), which, for example, is often used in conventional LEDs for illumination.

Microscopic LEDs have very small dimensions of about 5 microns.

Of course, this factor is the main advantage of Micro LED technology vs OLED. In fact, it opens up excellent prospects for further reducing the thickness of the matrix and the cost of its production, even for a large diagonal.

But manufacturers are forced to solve the complex technological problem of placing and fixing millions of LEDs on the panel surface. Companies solve it by forming large LED arrays, which are then applied to the panel.

On the other hand, high resolution for such an array requires high precision assembly and soldering. Today it reaches ± 34 µm, which, unfortunately, significantly exceeds ± 1.5 µm for the tiny microLED components. Apparently, the solution to this problem will be the main direction of this technology development. Today, companies mainly place arrays of LEDs on a plate.

– high brightness and perfect black due to the lack of backlight provide high dynamic range (HDR);

– ample opportunities to integrate sensors into the display panel; 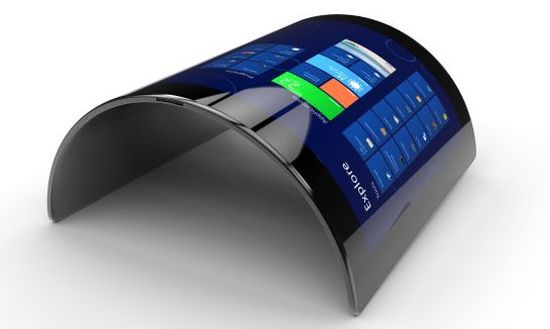 Unfortunately, this technology is effective only for panels with a relatively low concentration of pixels and significantly limits the possibility of increasing the resolution, for example, the smartphone matrix. However, back in 2016, Apple announced the micro-LED panels for the future Apple Watch. 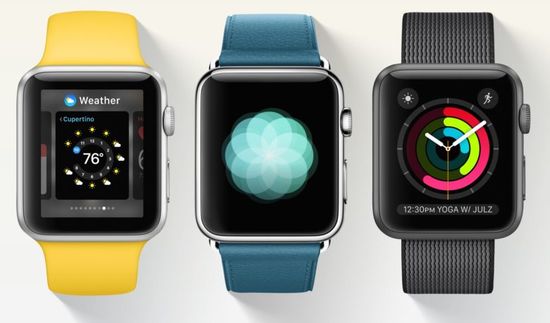 For comparison, the reduction in power consumption can reach 90% compared to the LCD display, and 50% compared to OLED. Of course, this factor can be a huge advantage for smartphones, increasing the duration of its work without recharging. Or, while maintaining the current power consumption level, increased brightness will increase the image contrast, which is important in daylight.

2. Micro LED displays have a longer longer service life compared to OLED panels due to the absence of burnout pixels. In fact, it’s limited only by the natural degradation of micro-LEDs, which provoke a shift in colors.

3. The response time of the micro-LED can be significantly reduced, up to nanoseconds. For comparison, this value for the OLED panel reaches microseconds. A very short response time opens up great prospects for the production of high-resolution panels in a compact form factor, including 4K or 8K smartphones or VR displays for virtual reality apps.

Today, Samsung is one of the main leaders in the development of this technology for Tvs.

As known, the company introduced the modular large-format The Wall Professional Micro LED display in 146- or 219-inch versions on the ISE 2018.

2 thoughts on “What is Micro LED”